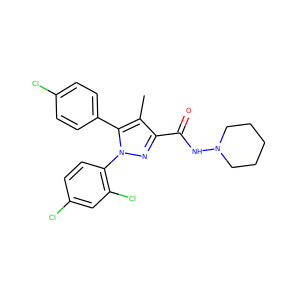 Rimonabant (168273-06-1, 158681-13-1)
Rimonabant (also known as SR141716; trade names Acomplia, Zimulti) was an anorectic antiobesity drug that was first approved in Europe in 2006 but was withdrawn worldwide in 2008 due to serious psychiatric side effects; it was never approved in the United States. Rimonabant is an inverse agonist for the cannabinoid receptor CB1 and was the first drug approved in that class.
Related searches
Pyrazoles
matrixscientific.com
Drugs acting on the gastrointestinal system and metabolism
Opioid receptor ligands