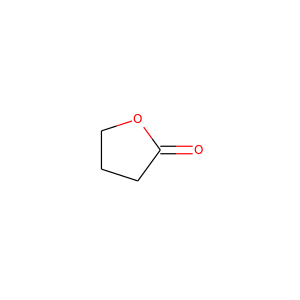 gamma-Butyrolactone (96-48-0, 187997-16-6)
gamma Butyrolactone  ·  4-Butyrolactone  ·  4-Hydroxybutyric Acid Lactone
γ-Butyrolactone (GBL) is a hygroscopic colorless liquid with a weak characteristic odor and profoundly disgusting taste. Soluble in water, GBL is a common solvent and reagent in chemistry as well as being used as a flavouring, as a cleaning solvent, as a superglue remover, and as a solvent in some wet aluminium electrolytic capacitors. In humans it acts as a prodrug for γ-hydroxybutyric acid (GHB), and it is used as a recreational intoxicant with effects similar to alcohol.

gamma-Valerolactone (108-29-2)
4-valerolactone
γ-Valerolactone (GVL) is an organic compound with the formula C5H8O2. This colourless liquid is one of the more common lactones. GVL is chiral but is usually used as the racemate.
Related searches
Food Additives
Solvents
GHB receptor ligands