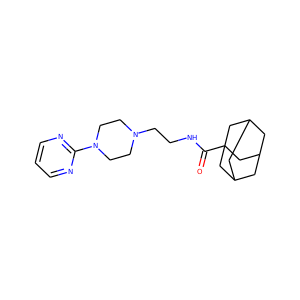 Adatanserin (127266-56-2)
Adatanserin (WY-50,324, SEB-324) is a mixed 5-HT1A receptor partial agonist and 5-HT2A and 5-HT2C receptor antagonist. It was under development by Wyeth as an antidepressant but was ultimately not pursued. Adantaserin has been shown to be neuroprotective against ischemia-induced glutamatergic excitotoxicity, an effect which appears to be mediated by blockade of the 5-HT2A receptor.
Related searches
Pyrimidines
Adamantanes