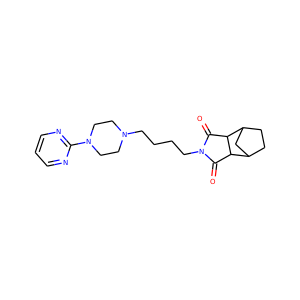 Tandospirone (87760-53-0)
Tandospirone (brand name Sediel) is an anxiolytic and antidepressant drug used in China and Japan, where it is marketed by Dainippon Sumitomo Pharma. It is a member of the azapirone class of drugs and is closely related to other azapirones like buspirone and gepirone. 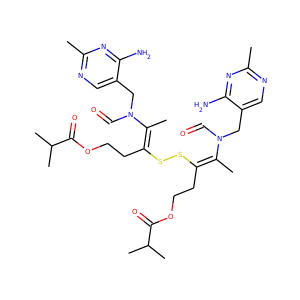 Sulbutiamine (3286-46-2)
2-isobutyrylthiamine disulfide  ·  Surmenalit  ·  bis(2-(isobutyryloxy)ethyl-1-N-((4-amino-2-methylpyrimidin-5-yl)methyl)formamido-2-propene-1-yl)disulfide
Sulbutiamine (brand name: Arcalion) is a synthetic derivative of thiamine (vitamin B1). As a dimer of two modified thiamine molecules, it is a lipophilic compound that crosses the blood–brain barrier more readily than thiamine and increases the levels of thiamine and thiamine phosphate esters in the brain. Sulbutiamine was discovered in Japan in an effort to develop more useful thiamine derivatives since it was hoped that increasing the lipophilicity of thiamine would result in better pharmacokinetic properties.
Related searches
Pyrimidines
Psychoanaleptics